At 64 years of age, Isabel is an accomplished writer, proud lifelong farmer, and social justice activist. She was born in the Intag valley, where her ancestors have lived for generations, and where she continues to sow her crops. Over the years, Isabel and her husband have watched the rainy season become dry, and the Intag river become polluted. She has worked for over a decade as a community leader, advocating for the rights of rural women against a neoliberal government that seeks to disempower them.

She has witnessed 26 years of sometimes violent resistance to mining in the Intag Valley, and the continual destruction caused by such exploitation. Now, international mining companies threaten to destroy the forests that remain, buying the mineral rights from beneath the lands of her home and her community.

The hope I have is… if I fight from today I leave a legacy, which is care of the environment, water and land. What little we have, we have to take care [of it], and deliver it to other hands. 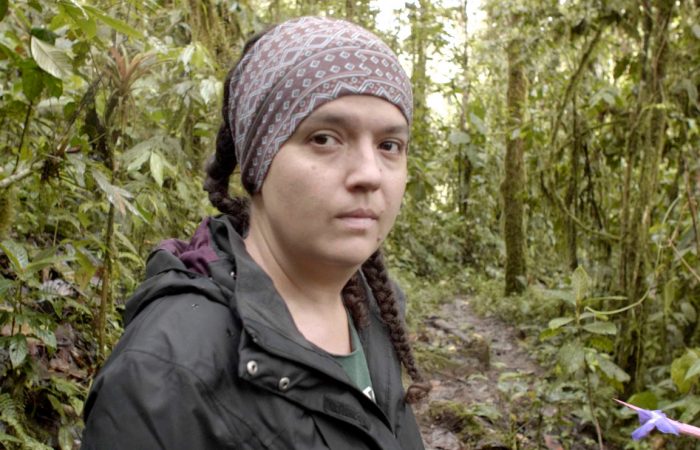 34 years old, Elisa is an Ecuadorian biologist and environmental activist who has worked extensively in wildlife conservation. Born to two activist parents, she was raised at the crossroads of the Awá territory and Colombian border, witnessing at a young age the indigenous movement by the Awá to gain their land rights. She, in turn, grew into her parents’ shoes to support the Awá community in their current fight against international mining companies.

Working with like-minded colleagues, Elisa helped create the watchdog nonprofit organization OMASNE, supporting and educating communities in northern Ecuador on their right to consultation and the impacts of large-scale mining on the environment and the watersheds these communities rely on.

Elisa — a specialist in the study of butterflies — helped to organize the National Geographic-funded Richer Than Gold expedition into the heart of the Los Cedros Protected Forest. Along with José DeCoux, the founder and director of Los Cedros, she is the backbone and force pushing to protect Los Cedros. Elisa is an activist powerhouse who is deeply dedicated to fighting for justice and raising up the voices of rural communities.

How can you put at risk the last remnant of forest we have, prioritizing big-scale mining income for a transnational company over the lives, the well-being, of Ecuadorians? 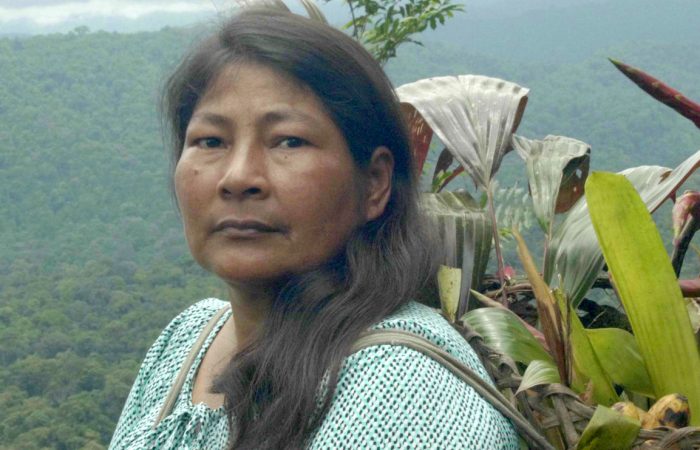 Filomena, at 49 years old, is an outspoken elder in the indigenous Awá community, an environmental activist, and a passionate community leader. She was born and raised on her ancestral homelands on the northern border between Ecuador and Colombia. She has witnessed decades of destruction from palm oil plantations and illegal mining on their territory, and has for decades fought to protect their lands and way of life.

By day, she is a crafter and vendor, selling homemade food and souvenirs on buses and in the streets. At night she is studying to become a nurse, to bring better healthcare to her community. With few jobs available in the area, the Awá have been heavily impacted by nearby illegal mining at Buenos Aires, the only source of income for many, but at times, at the cost of their lives. Filomena is deeply poetic and outspoken, and harshly realistic about the future of her people in the shadow of large scale mining.

The Awá nationality are people, equal to other human beings. But others mistreated us, saying that we are Indians, we are Indians…

The Awá people are an indigenous group native to the mountainous regions of northern Ecuador and southern Colombia. Theirs is one of the closest indigenous territories to the threatened Los Cedros Protected Forest. Since their official recognition by the Ecuadorian government in the 1980s, the Awá have been outspoken and politically engaged. Their position on the Colombian border, however, has put them in harm’s way: in 2009, more than two dozen Awá, including women and children, were massacred in the conflict between FARC and the Colombian army in the southern Colombian province of Nariño. And more recently, an oil spill in Colombian Awá territory destroyed an entire community.

When the Ecuadorian government decided to push for mining expansion, the Awá saw 70% of their lands included in mining concessions. Though many of these concessions have been “unofficially” relinquished, mining companies are still visiting and trying to influence smaller villages, and prospecting has begun in the bordering protected forest of Cerro Golondrinas Reserve, within which are the headwater of major rivers upon which the Awá rely. This protected forest is run collectively by the surrounding communities, and the majority of the Reserve is currently under mining concession.

Awá people have publicly and repeatedly voiced that they are against mining in their territory. However, because of the lack of economic opportunities, some in the community seek work in the nearby illegal mines of Buenos Aires, one of the most heavily contested mining sites in Ecuador. Widespread corruption, lack of oversight, and the involvement of organized crime makes this an extremely dangerous place to work, forcing many Awá to choose between their own safety and the ability to feed their families.

In a valley to the west of the Intag is the Los Cedros Protected Forest, a 17,000 acre preserve founded in the early 1990s by José DeCoux. This forest represents some of the last un-spoilt primary cloud forest on the western slope of the Andes in all of Ecuador. It is home to a vast array of rare and endangered species including some of the last wild habitat for the Brown-Headed Spider Monkey, the most endangered primate on the planet. All told, there are more than 200 endangered species known to live at Los Cedros, including jaguars and spectacled bears, orchids and birds.

The Canadian mining company Cornerstone bought the mineral rights to more than two-thirds of this protected forest in 2017, without consultation or consent from the preserve managers or the surrounding communities. They have already begun the initial stages of mineral prospecting within the protected forest, despite ongoing legal challenges, including the protections for the Rights of Nature built into the Ecuadorian constitution. Forests like Los Cedros, known as ‘Bosques Protectores’, are wildlands that are protected by the Ecuadorian government from logging and other disturbances. However, the current government has decided that these forests are not protected from mining, and has sold the mineral rights to these lands.

Los Cedros continues to fight the legal status of these mining concessions, even as the mining company has announced plans to start drilling in the near future. The case has been picked up by Ecuador’s Constitutional Court, the highest court in the land. This ruling will set a precedent for how the constitutionally-guaranteed Rights of Nature are applied in protected forests across Ecuador, with widespread consequences for all 6 million acres of protected forest in the country, and reverberating around the world as either a landmark victory or defeat for endangered species everywhere.

The Intag Valley is the center of mining conflict in northern Ecuador, and home to some of the most outspoken activists against mining expansion in the country, including Isabel Anangonó and Carlos Zorilla. The people who live along the rushing waters of the Intag river have witnessed decades of struggle with mining companies in this region, and now find huge chunks of their territory — encompassing entire townships — sold in mining concessions. In the early part of the new millennium, the community banded together and fought against abuses by Canadian mining company Ascendant Copper, which used paramilitary force, pepper spray, and bullets to subdue the community. Residents of the Intag Valley refused to allow mining in their region, and locked up the miners and paramilitary security in their local church until authorities came to apprehend them.

Despite this history of resistance, the amount of land granted to international mining companies has only increased in recent years, and many corporations are actively engaged in prospecting within the valley, in direct violation of the wishes of the communities that live here.

As the COVID-19 pandemic continues, mining companies have accelerated their projects in the area, bringing in outside workers and putting the communities here at risk. With no local healthcare system, and Ecuador’s city hospitals already severely overloaded, there are no options for those who get sick. Because many in the communities don’t have savings to rely on, the restrictions on travel and work caused by the pandemic have left many here struggling just to survive.